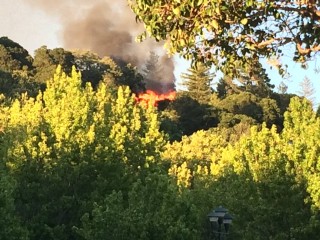 Narrative:  Ross Valley Fire Department responded to a residential structure fire located at 224 Ridgeway Road, Fairfax. Fire engines reported heavy fire showing while en route. The first arriving engine found heavy fire to the rear of the structure with extension to the interior living space. A second alarm was requested. An aggressive interior attack was initiated but crews had to withdraw from the building due to extreme conditions and fire progression. The fire was attacked from the exterior until conditions were safe to continue with an interior fire attack. The fire was brought under control with no injuries to civilians, pets, or firefighters.