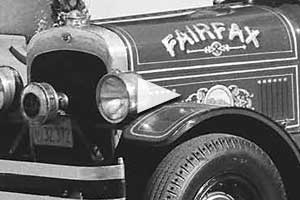 Ross Valley Fire Department traces its history to the early 1900s, with the formation of small volunteer fire departments in the newly formed towns of Ross, San Anselmo, and Fairfax.  Built near the wildfire prone slopes of Mount Tamalpais, these communities were acutely aware of the risk of fire - many residents had relocated here following the devastating earthquake and fire in San Francisco in 1906.

More than 100 years later, three fire departments, and the traditions they were built upon, have merged to become the Ross Valley Fire Department.

Recognizing the importance of tradition and history, Ross Valley Firefighters work to preserve their heritage by maintaining a library of artifacts, antique fire apparatus, photographs, and written and oral histories.  Please view our online historical photo gallery to see a glimpse of the proud tradition of firefighting in Marin's Ross Valley.

1908  The Northwestern Pacific Railroad presents San Anselmo with a 1200-pound bell for use as a fire alarm to summon Volunteer Firefighters.

1909  The town purchases a horse-drawn hose wagon with a chemical tank (water was pressurized by mixing chemicals similar to vinegar and baking soda rather than a mechanical pump), but had no horses.  The hose wagon was housed inside the Marin Fuel Company Building.  Charles Cartwright was appointed as the town's Fire Chief.  The town paid $500 for a pair of fire horses named Major and Colonel.  The town’s new firehouse opened adjacent to the new town hall.

1915  Chief Cartwright informed trustees that it would be more effective to buy a motorized truck than to buy and train a third horse.

1916  The truck arrived and Major and Colonel were “released” from theirfirefighting duties.

1930  Nello Marcucci was named Fire Chief, succeeding Cartwright, who then became Fire Marshal.  The town added a new 600-gallon Seagrave truck for a cost of $9,000.

1936  On June 27, 36 year old Fire Captain Robert A. Meagor died fighting a grass and brush fire just inside Sleepy Hollow.  He fell into a ditch, allowing the fire to overtake and burn over him.  Captain Meagor's death was the first and only fatality of a San Anselmo Firefighter while on duty.

1944  On June 25, the deadliest fire in San Anselmo history occurred.  A home on Floribel Avenue was consumed by fire and Carroll Johnson, his pregnant wife; two young sons and dog were killed.

1976  As part of the town hall renovation project, San Anselmo paid Rosemary Parsons $58,000 for a parcel with a gasoline station at San Anselmo and San Rafael Avenue for a new fire station.  The new firehouse was built by the Rudo-Mekin Construction Company of San Rafael at a cost of $334,000.  The old firehouse was raised and replaced by today’s two-story police/town hall office building, Fire Station 19.

1908  The first Ross Fire House was erected and the Town of Ross was incorporated. There were 750 dwellings including summer residences.

1926  The Town of Ross voted $100,000 to buy the Shotwell estate upon which to build the present Ross Town Hall and Fire House.

1910-1981  Operated with a paid Fire Chief, Assistant Fire Chief, and volunteer firefighters until 1981.

1982‐1986  Fire Deparment is run by two Fire Captains, some occasional sleepers and volunteers. 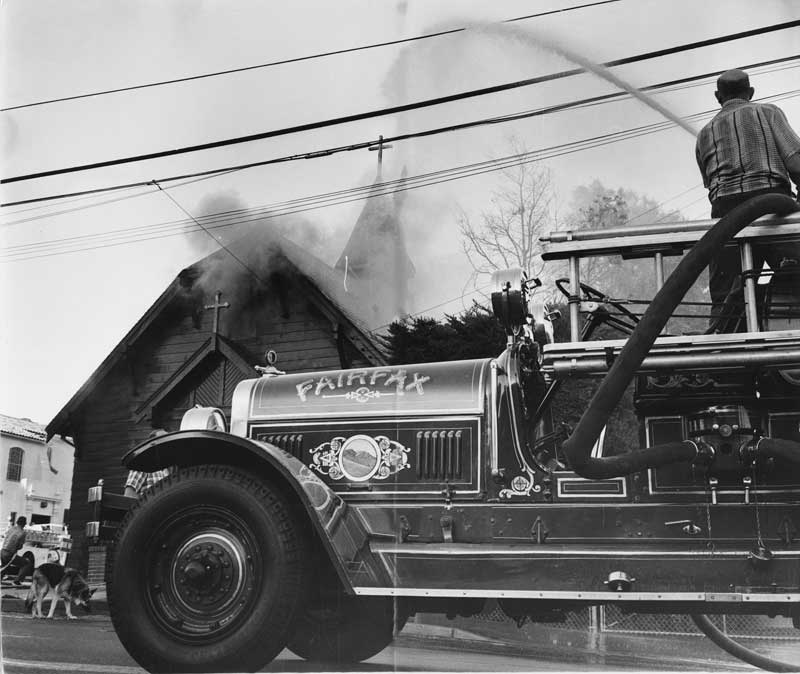 1915  Citizens of the region voted to tax themselves and formed a Fire District.  The District included all the territory from White’s Hill to the Meadow Club. The District then purchased the lot on Bolinas Road that they had been leasing since 1914. The lot is located where the public parking lot is today near Mono Ave.  This became the main fire station and was large enough to house the first motorized fire apparatus.

1926  The Fire District builds a modern Fire Station located on the corner of Bolinas Road and Park Road.  The building is a two story wood frame with stucco exterior.

1929  The Fire District purchases a Seagrave 500 gallon per minute pumper.  This engine, which served until the early 1970s, is now restored and used as a parade vehicle and historical display.

1956  All Fire apparatus are equipped with two-way radios, improving communications and allowing fire engines to be notified of emergencies while away from the fire station.

1974  A new fire station (what is now Fire Station 21) was built adjacent to the old station. The old station was demolished and replaced with a new building that is currently occupied by the Fairfax City Hall and the Fairfax Police Department. The staffing of the Fairfax Fire Department consisted of eight paid members and twenty volunteers.

1982  The Fairfax Fire Department and the San Anselmo Fire department joined forces and became known as the Ross Valley Fire Department. This action was approved by both City Councils in an effort to improve service to both communities while reducing the cost of providing service.

The goal of the consolidation was to provide a larger, more efficient fire service that would ultimately provide a higher level of fire protection and service to the residents of Fairfax, San Anselmo and Sleepy Hollow.  At the time of the consolidation, there were three Chief Officers, 11 Captains, and 14 Firefighters.  During the course of consolidation discussions, the negotiating parties developed the model for the department which was ultimately adopted, developed employer/employee resolutions, grievance procedures, and a model for a new contract, which would cover the employees in both departments.  All of this was done in conjunction with LAFCO with regular updates to the Town Councils.

Initially the plan was to hire an additional three firefighters at the retirement of the Fairfax Fire Chief and one of the San Anselmo Captains and raise the staffing level of the Station 21 to three persons on-duty; with two persons on-duty at Station 20 and three persons on-duty at Station 19.  There would also be a Chief and an Assistant Chief.  Ultimately, these positions were not created, and instead the department continued with the current staffing level of one Chief Officer on duty 24 hours per day, and a minimum line staffing of three Captains and three Firefighter/Engineers.

From the inception, each jurisdiction received the benefit assistance from the other townson first alarm assignments (the initial dispatch to a reported fire) - meaning that three fire engines responded to fires instead of one.  Ultimately, with the addition of paramedics, the initial response to reported fires was increased to three engine companies, one paramedic ambulance, and a Chief Officer.  This was a significant improvement in service to the public from the previous response level (prior to consolidation), which was two Firefighters from Fairfax (plus off-duty personnel and volunteers when they were available) to a Fairfax fire, or two engines and a Chief Officer to fires in San Anselmo and Sleepy Hollow.