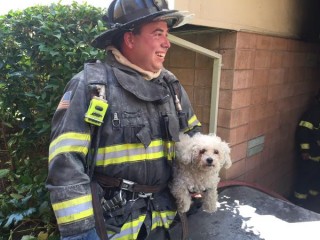 June 3, 2015, Kentfield, CA.  Firefighters rescued a woman from her balcony at an apartment complex fire this morning in Kentfield.
Sheriff's Lt. Doug Pittman says the apartment where the rescued woman lives was engulfed in flames when firefighters arrived.

Firefighters say there were no reports of serious injury, but 12 people were displaced. One woman suffered smoke inhalation said Pittman.

The apartments are located on Kent Avenue near Hillside Avenue.

The fire broke out around 9:30 a.m. It was contained about an hour later. A small stretch of Kent Avenue will remained closed as crews finish up their work.

Firefighters from Kentfield, Ross and Corte Madera responded to the blaze, and the Red Cross is providing aid to those affected.