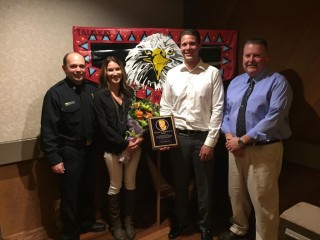 On March 14, 2014 Ross Valley Fire Department Captain Gavin Illingworth was awarded the 2016 "William H. Spurgeon III Award."  The award, which was developed in 1971, is the highest recognition for individuals and/or an organization contributing significant leadership to the Exploring program. Throughout his career, Gavin Illingworth, has dedicated and provided countless hours of mentoring, developing, coaching, and supporting youth in Marin County that are interested in the Fire Service. Gavin has created a legacy of excellence associated within the Ross Valley Fire Department's Fire Exploring Program. He has managed the Explorer Program in partnership with others, mentored many young Fire Explorers, attended and organized countless training exercises, and provided a safe and comfortable learning and training environment for youth to ride-along and learn about a career as a firefighter.

Gavin has been actively engaged with the California Exploring Association for the past 13 years, 6 of which have been as an Executive Board member. It has been estimated that Gavin has volunteered over 4,000 hours within the past 13 years that he has been involved with the program. Many of the Fire Explorers that Gavin has been in contact with throughout the last 13 years are now serving as Professional Firefighters within Marin County as well as throughout California. Regardless of the career choices, the youth involved in the Fire Explorer Program develop: character, build self-confidence, leadership, social skills, and teamwork.

On Behalf of the Ross Valley Fire Department, we would like to congratulate and more importantly thank Gavin Illingworth on his dedication to our community.